It is March of 1944, and Franklin Delano Roosevelt is dying. His physicians, Lieutenant Commander Howard Bruen and Vice-Admiral Ross McIntire, know it, as do a handful of others McIntire brought in. FDR probably knows it as well, no matter how much his doctors may have sugar-coated their findings. He has cardiac insufficiency, arteriosclerosis, congestive heart failure, an enlarged and failing left ventricle, and mitral valve issues. Modern medicine would likely have offered more productive years of life, but, in the era before sophisticated heart surgery, before the development of a heart-lung machine, and with a very limited formulary of drugs, it is just a matter of time, maybe a year at most. 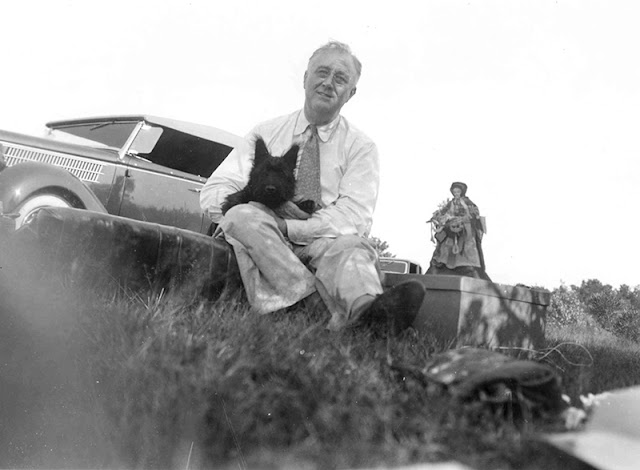 His decline was obvious. You could see it on his face, in the amount of time he needed to recover from exertion, in the loss of weight. He had undertaken a long sea trip on the USS Baltimore to visit American forces in the Pacific, but spent much of it in his stateroom, resting. An ordinary man of that time would have scaled back, gradually becoming a convalescent. But FDR was no ordinary man, and 1944 no ordinary time. Obviously, the Democratic Party would re-nominate him for an unprecedented fourth term, if he wanted it, but there was deep concern in the family that he would never survive. Eleanor Roosevelt was later quoted as saying, “If Franklin loses, I’ll be personally glad, but worried for the world.”

It was also a time of war-weariness. America was on the offensive, but the going was slow, progress not linear. Germany and Japan were wounded, but by no means anywhere near surrender. The public was unhappy. There had been reluctance to involve ourselves in the first place, and, while few people openly voiced resistance after Pearl Harbor, many of the old isolationists became critics of Roosevelt’s leadership. Republicans, still at an electoral disadvantage after carrying the legacy of Herbert Hoover and the Great Depression, nominated Thomas E. Dewey to oppose FDR. Dewey was credible. He had built a national reputation as an incorruptible crusading prosecutor who took on the rackets and convicted Lucky Luciano, then gone on to become New York’s 47th Governor by the time he was 40. This was Dewey’s second chance; he had run for the Republican Presidential nomination in 1940 and been considered a favorite, but his early non-interventionalist stand caused him to lose support as Germany marched through Europe. By 1944, having become more internationalist, he defeated Wendell Wilke (FDR’s victim in 1940) to obtain the nomination.

Dewey was not a magnetic campaigner: If truth be told, he was more than a little bit of a stuffed shirt, with a routinized method of campaigning calculated down to the minute. His themes were ones he clung to as a prosecutor, things like corruption, mismanagement, and Communists, but Democratic wisemen thought him a serious threat to FDR, especially a weakened FDR. The omens were bad—in the 1942 midterms, with America fully engaged in a war that, at that point, was not going well, the GOP picked up 47 seats in the House and eight in the Senate.

More seriously, Roosevelt’s few extended public appearances gave them little comfort. There was no way to ease him out of the job (and the impact on the public would have been profound), but the possibility of his losing (or being unable to complete his term) had to be on their minds. He gave a particularly poor radio address from the Portland Navy Yard in Bremerton, Washington, on August 12, and, quietly, friends and close advisors began to urge him to find a venue to show the old magic.

A bit of good luck occurred when, in early September, a Republican Congressman, Harold Knutson of Minnesota, accused Roosevelt of having left behind his dog Fala in the Aleutians when on his Pacific trip, and then sent back a ship (and then a plane) to retrieve him, at enormous cost to the taxpayers. Orson Welles, who was then campaigning for FDR, noticed it, and passed on to FDR the suggestion that Knutson’s remarks created an opportunity.

FDR may have been physically diminished, but his political instincts were still sharp. He decided to give an address to a friendly audience (the Teamsters, who, by Roosevelt’s description, had “big hands” for applauding) on September 23, 1944. What followed was one of the best performances you will ever read or see (I’ve only been able to find a partial video, but even that is worth the time, particularly for the entirely serious demeanor Roosevelt keeps during the entirety of it). You may also find that very little is new in politics, not just in ideas and issues, but in the value of pure talent, which Roosevelt had in abundance.

We all know that certain people who make it a practice to depreciate the accomplishments of labor—who even attack labor as unpatriotic—they keep this up usually for three years and six months in a row. But then, for some strange reason they change their tune—every four years—just before election day. When votes are at stake, they suddenly discover that they really love labor and that they are anxious to protect labor from its old friends.

We have all seen many marvelous stunts in the circus but no performing elephant could turn a hand-spring without falling flat on his back…. What the Republican leaders are now saying in effect is this: ‘Oh, just forget what we used to say, we have changed our minds now—we have been reading the public opinion polls about these things and now we know what the American people want.’

Roosevelt on money in politics:

But, you know, even those candidates who burst out in election-year affection for social legislation and for labor in general, still think that you ought to be good boys and stay out of politics. And above all, they hate to see any working man or woman contribute a dollar bill to any wicked political party. Of course, it is all right for large financiers and industrialists and monopolists to contribute tens of thousands of dollars—but their solicitude for that dollar which the men and women in the ranks of labor contribute is always very touching.

They are, of course, perfectly willing to let you vote—unless you happen to be a soldier or a sailor overseas, or a merchant seaman carrying the munitions of war. In that case they have made it pretty hard for you to vote at all—for there are some political candidates who think that they may have a chance of election, if only the total vote is small enough.

Roosevelt on blaming the other Party for what your guy did:

For example, although I rubbed my eyes when I read it, we have been told that it was not a Republican depression, but a Democratic depression from which this Nation was saved in 1933—that this Administration this one today—is responsible for all the suffering and misery that the history books and the American people have always thought had been brought about during the twelve ill-fated years when the Republican party was in power.

Through all of this, his audience cheered and hooted, and he milked it for all he could. But he was saving the choicest cuts for later. He rolled through a fairly prosaic few paragraphs and then went for the jugular, with the timing of a comic genius.

These Republican leaders have not been content with attacks on me, or my wife, or on my sons. No, not content with that, they now include my little dog, Fala. Well, of course, I don’t resent attacks, and my family doesn’t resent attacks, but Fala does resent them. You know, Fala is Scotch, and being a Scottie, as soon as he learned that the Republican fiction writers in Congress and out had concocted a story that I had left him behind on the Aleutian Islands and had sent a destroyer back to find him—at a cost to the taxpayers of two or three, or eight or twenty million dollars—his Scotch soul was furious. He has not been the same dog since. I am accustomed to hearing malicious falsehoods about myself—such as that old, worm-eaten chestnut that I have represented myself as indispensable. But I think I have a right to resent, to object to libelous statements about my dog.

The crowd (by this point thoroughly juiced up, both metaphorically and actually) went nuts, as, I would imagine, did millions at home listening to their radios. I doubt anyone paid much attention to the rest of the speech. Roosevelt had done his job. He was still the same old FDR, suave, virile, witty, tough, ready to fight the Germans, the Japanese, Dewey, and the Republicans all at once. He was still their hero.

The coverage was phenomenal. He got page one in the major dailies, even those who had opposed his running. Republicans foolishly took the bait, starting at the top. Dewey made some tone-deaf remarks about Roosevelt’s joking while our boys were dying overseas and insisted that he would “now campaign all the harder.” It just confirmed many people’s views of him as a stuffed shirt’s stuffed shirt. Paul Porter, who was serving as the DNC’s head of publicity for the 1944 campaign, wrote a memo saying that the race had become one between Roosevelt’s dog and Dewey’s goat. He then allocated a considerable amount of campaign funds to running a radio spot with the recording of the Fala portion of the speech, introduced by the old country song, “They Gotta Quit Kick’n My Dawg Aroun.’”

There is no question the speech changed the dynamic of the race. In an era before 24-hour television cameras, Roosevelt could limit his exposure through to November, with Fala the closing argument. Six weeks later, Roosevelt swept to victory, with an Electoral College margin of 432 to 99. Democrats lost one Senate seat, but picked up 20 in the House. The old man had done it again.

It was, in many respects, the last hurrah. FDR’s health continued to decline, and his evident weakness showed itself both privately and in public. He was a gaunt, hollow-eyed shadow at the Yalta Conference in February 1945, and arguably was taken advantage of by Stalin. On April 12, 1945, after several earlier health crises, he was felled by a massive stroke.

Fala never quite got over it. At FDR’s private burial, he howled and turned over several times.  He lived until 1952, when his Scotch soul joined Franklin’s and, then again, at the FDR Memorial in Washington, where the two old friends talk of old times, and no one, ever, dares to pick on Fala.

A Joyous Bit of Politics: FDR's Fala Speech was first published on 3Quarksdaily.com on August 17, 2020.