The Iceberg And The Pressure Cooker-On 3Q

The Iceberg has broken off from the ice sheet, and it’s a whopper. It groaned and teetered and shook, hanging on maybe longer than science said it should have, and, then, with a mighty roar, it slid into the ocean. It’s been floating about ever since, banging into things. 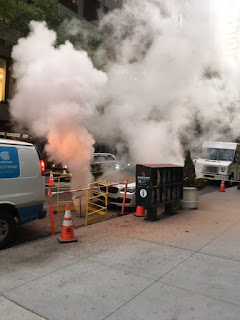 Last week, I attended the 17th annual conference of Columbia University’s Center on Capitalism and Society: “Progressivism, Socialism, and Nationalism.” Everyone talked about the Iceberg—where it came from, what it might hit next, what could stop it.

It was a full day, with over two dozen speakers from a variety of backgrounds and outlooks. Two Nobel Prize winners, Joseph Stiglitz and Edmund Phelps, were joined by panelists from across the political spectrum, from the (real) Socialist Bhaskar Sunkara, Founding Editor and Publisher of Jacobin magazine, to Douglas Holtz-Eakin, President of the American Action Forum, and Ryan Streeter of the American Enterprise Institute. Add a variety of luminaries, including Richard Sennett of the London School of Economics and the ubiquitous (and engagingly scary) Jonathan Haidt, and there were a lot of perspectives.

I don’t have the space to cover everything (I will post links to the sessions when available from the Center), but the issues raised were important and worth examining.

Refreshingly, the day was mostly issue-oriented and apolitical. The panelists clearly didn’t want to get into the weeds; to the extent President Trump and Senators Sanders and Warren’s names came up at all, it was very briefly and in the context of some of the specifics of their economic policies: In Sanders and Warren’s case, mostly about the cost of their programs like Medicare for All, and, in Trump’s, his desire to remake international trade arrangements and rework the post-World War II order.

Those are pretty big things, and it was clear that these folks had some strong opinions—Stiglitz, for example, cheerfully and forcefully called for rearranging much of the economic landscape—but they kept the rhetoric to a minimum. Rather, there seemed to be a consensus that they wanted the discussion to be about policy and not personalities. I am going to try to keep to that as well.

More as a way of arranging my own thoughts than anything else, I am going to put things into three buckets—the factors that helped fracture the ice-sheet of long-held expectations and are still driving us apart, the consequences of the separation, and a recognition of new priorities that could help bring us back together.

Just because I don’t want to discuss Trump or any of the Democrats doesn’t mean we shouldn’t be examining the electoral process. So, let’s talk about how we got here, or, more accurately, how we got the government we may have deserved.

How do we choose? Usually, through some form of self-interest, as we should, but in voting, self-interest means different things to different people. I’m always amused by politicians who proudly announce they got a perfect score from one special interest group or another. It could sway a few voters, but few of us go into the voting booth with a 20-question checklist in our hands. We weigh our issues based on their impact on us personally, then to principles we hold dear. If there’s any room at all after those two big ticket items, we might look closer at other things, but in truth, almost all of us know we apply what I am going to call a priority rubric.

In this process we often show very little self-awareness. As to people who vote differently, we are often shocked: “I don’t understand how X (insert voting bloc) could possibly vote for Y.” In fact, all they have done is exactly what we have—apply a priority rubric.

This is simple for single-issue voters. If you are a truly committed pro-life activist, you aren’t going to trade it away because you don’t agree with a like-minded candidate on other, less important (to you) things. If that candidate is elected, you expect him to share your passion for your issue and work for the pro-life cause. The same might apply if you were the CEO of a Fortune 500 company—you have a responsibility to your shareholders to maximize returns on investment, and likely would support the more pro-business candidate unless that candidate was so radioactive to your customers that prudence advised silence.

Those are the easy ones, where self-interest is clear and within a rational framework. But the priority rubric gets far murkier when it becomes less issue specific and more about a general feel about your personal circumstances. The system should be delivering for you, or, at the very least, not hurting you. It should certainly be delivering for you if the people you voted for were in a position to help you—and not only didn’t, but might have added to your pain.

This has been the Achilles Heel of the post-World War Era and neoliberalism. For the last generation at least, too many voters’ perfectly logical choices were not being rewarded with results. People were being left behind by a system that wasn’t really sensitive to their needs. Stiglitz and others refer to a rent-seeking governing class that really only worked for the elites. That’s true as far as it went—the rich and powerful purchased access with campaign contributions and other types of support, and elected officials paid them back with favorable legislative treatment, often at the expense of the public.

Working folks were realists. They were aware that politicians had to cater to the elites. But with FDR, with Truman, with JFK and LBJ, they also knew they always had a powerful friend, a champion, and were loyal in return. Exactly when the iceberg began to break off is hard to pinpoint, but, as Leif Pagrotsky, the former Swedish Minister of Commerce, points out, it took at least a generation to get to where we are right now (and, correspondingly, there will be no quick fixes).

What is clear is that, at some point in the last roughly 25 years, the Democrats stopped paying so much attention to bread-and-butter issues and began to refocus on what I’m going to call “boutique” ones. They still, reflexively, threw out a bunch of social welfare programs, but they missed the bigger picture: The working class perceived an existential risk, and it seemed that no one was paying attention. If anything, we educated elites were abandoning them through what was effectively noblesse oblige. With our good schools, our manicured lawns, our book-filled homes, we could be Globalists, taking in The Prado, sipping an espresso at a Parisian café, and living the good life. Of course, this was a caricature. But, like any caricature, there was an uncomfortable kernel of truth. The reality was we could be Democrats on social issues and open-minded citizens of the world, welcoming to those from other cultures, in large part because we could choose the interactions we wished to have.

The key phrase is “we could choose.” But the people making up the Iceberg can’t. And because they can’t, they pay for our virtue. They don’t really want the low-wage jobs at the new poultry-processing plant that immigrants fill, but they don’t want their lives made more difficult as a result of the presence of them. The way they see it, every dollar devoted to newcomers is one that is drained away from them. Whether this is truly a factual linkage is debatable, but to hold to it is not unreasonable.
So, the Iceberg is out there. It may seem odd that, right now, it makes common cause with the wealthiest who, when they are not investing in rent-seekers for a return, they are devising new ways to hold down wages and cut benefits. But, until someone else offers them something better, they might as well hunker down and try to save what they have.

The implications of this are immense. From a purely political perspective, both here and in Europe, it destabilizes the old order. Haidt is unsparing on this point—there is tremendous appeal to autocracy; those are the guys who are the egg-breakers. They kick over the traces of multinational cooperation to return to an aggressively nationalist approach, pull up the gates, and make the trains run on time. In Haidt’s framework, this movement is essentially unstoppable. (He also predicts the functional end of American democracy within 30 years.)

Why shouldn’t we put America first, always, as we prioritize our needs? Because there are problems that require multi-lateral or even global solutions, and they create mutual dependency. And because, as rich and as powerful as we are, we too can’t always go it alone. Sennett talks about climate change in that fashion, as requiring worldwide cooperation and sacrifice, but that could just as easily apply to combating global terrorism, or the threat of nuclear war, or the mass migration of displaced people. Sennett notes that rising temperatures are impacting arability of land, and even habitability, and quoted an estimate of 83 million Africans who will have to move in the next two decades. Let’s call the data underlying that estimate unduly alarmist, and off by a factor of 10. That leaves 8.3 million Africans who are going to need a place to live. Where, exactly, are they going to go? A few years back, 1.5 million refugees caused huge spasms of protest and overturned several governments in Europe. What does anyone think 8.3 million will do?

A call to kumbaya and cooperation? Not without reforming the underlying issues and not without a better understanding of the necessity of it. That’s far easier said than done, because, as Binyamin Appelbaum of The New York Times points out, a rejection of the status quo is coming from both right and left. Outside of a few out-of power neoliberals in the United States and under-siege technocrats in Europe, there is no critical mass for mutual, coordinated, cooperation. In a world where too many people feel left behind, one can understand the lack of hunger for more of the same.

Where do we go from here? Or, more accurately, where do we need to go from here? On this, there was a surprising amount of consensus, as participants from across the spectrum found points of intersection. If there is a way to deal with the Iceberg, it’s going to involve more innovative thinking to heal what Phelps refers to as “[a] deep malady developing in American society, a problem out of reach of the reforms we have been hearing about from the politicians,” specifically, “the decline in the experience of work.” Margaret Levi of Stanford notes that healing requires an acknowledgment that neoliberalism has failed, and a rebuilding of labor unions for their sense of solidarity and community. Streeter of AEI also emphasizes the benefits of civic participation: “Residents in well-balanced communities have been shown to be happier, more trusting of neighbors, and more confident in their governments.”

Agency, community, participation, work with meaning might lessen the pressure and allow us to find a new equilibrium. But that is going to take a great deal of time, with an uncertain prospect of success. For now, we also need to hold on really tightly, as that Iceberg makes its way, looking for new things to collide with.

The Iceberg And The Pressure Cooker was first published on 3quarksdaily.com on October 14, 2019

And please join Syncopated Politics on Twitter at  https://twitter.com/SyncPol