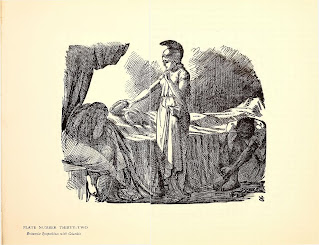 In the Bushido code, the samurai were said to have identified with the cherry blossom particularly because it fell at the moment of its greatest beauty, an ideal death.

It is one of the remarkable coincidences of history that the anniversary of Abraham Lincoln’s assassination often comes at the very peak of the cherry blossom season.  In many respects, he, too, died at the moment of greatest beauty—right after he had delivered his “with malice towards none” Second Inaugural Address, right after he had seen Richmond and was mobbed by grateful freedmen, right after Lee had surrendered to Grant, right after there were no more battles he could win.

The historian Richard Hofstadter once wrote, in his essay Abraham Lincoln And The Self-Made Myth that “The Lincoln legend has come to have a hold on the American imagination that defies comparison with anything else in political mythology.”

That legend, which Hofstadter likens to a Christ-like assumption of the sins of mortals, followed by their redemption through his martyrdom, is one half of the consensus historian’s construct about how we think about the Civil War.  The other half is best embodied in Robert E. Lee, graying, aristocratic scion of a famous family, kind as a master, brave and brilliant as a reluctant warrior.

This iconography creates a fascinating, yet discordant picture.  Jefferson Davis is nowhere to be found—he’s a cold and crabbed man who lacks the élan and nobility to exemplify what the South “really” was.  And Grant is invariably portrayed as stolid, relentless, a winner because of overwhelming force, not greater virtue.  Even the scene at Appomattox plays into this.  Lee, unwilling to expose his men to further losses, agrees to surrender.  He approaches, at the agreed-upon time, in his best dress uniform, mounted on his magnificent horse, Traveller.  Grant, stoop shouldered, wearing a private’s tunic, dusty from the field, boots muddy, arrives a half an hour later.  They talk briefly of old times, and Grant offers generous terms and honors, which Lee graciously accepts.  Lee, with great dignity, rides off to his men.

It’s a wonderful image that allows both sides (and, as I have been reminded a number of times by people a little more Southern than my Bronx birthplace, there are still two sides) their respective heroes, and their respective fantasies of what might have been—a peaceful, respectful reconciliation.  But, the war doesn't end this way without a final sacrifice, and Lincoln is it.  Just a few days later, John Wilkes Booth makes his way to Lincoln’s seat at Ford’s Theatre, fires the shot that ends Lincoln’s life, and elevates his legend. That the assassination took place on Good Friday, and during Passover (Rabbis of the time likening it to Moses being permitted to see, but not enter, the Promised Land) gives it an even more powerful emotional tug.

Not everyone mourns.  Lincoln is not an immensely popular figure among the powerful.  He is opposed by both Northern Democrats (he’s just won reelection against his former General of the Army of the Potomac, John McClellan) and by many of the more committed abolitionists in his own Republican Party. Lincoln is too hot for some, too cool for others.  Both the steadfastness of his purpose, and the gradualism of his approach have made him many enemies. Northern Copperheads have never stopped hating him, and the Radical Republicans want a far more punitive response than Lincoln’s call for reconciliation and “binding up the nation’s wounds.”

In the South, reaction was often careful.  A few think it’s a miraculous turning point, some of the Southern newspapers exulted, and Jefferson Davis reportedly said “If it be done, it would be better that it be well done.”  But many others (Lee amongst them) worried about not just the anger of the North, but also the loss of Lincoln as a buffer—they know he stands between them and a vengeful Congress.  And they hate Lincoln’s Vice-President, Andrew Johnson, a border-state Democrat, despised and feared as a traitor to his own people.

But the common people have a different reaction than the more calculating political class. Perhaps they felt Lincoln was one of their own; literally millions gather to see his train, look at him as he lay in state, and mourn. They seem to understand something that eludes the merely ambitious—they stand with him as he stood with them.  One of the most remarkable tributes came from the residents of Lahaina, in the Hawaiian Islands; the people “weep together with the republic of America for the murder, the assassination of the great, the good, the liberator Abraham Lincoln, the victim of hell-born treason—himself martyred, yet live his mighty deeds, victory, peace, and the emancipation of those despised, like all of us of the colored races.”

What about Hofstadter’s “Lincoln Myth”? Does the reality match the image of fallen saint?  Last week, I asked what kind of man was Lincoln—what did he really believe?  What is it about him that allowed him to transcend his own of-the-period but anachronistic attitudes?  How could a man who, in 1858, in the Charleston debate, state “I will say in addition to this that there is a physical difference between the white and black races which I believe will forever forbid the two races living together on terms of social and political equality” yet nevertheless inspire the gratitude “of those despised, like all of us of the colored races.”

I think he had two unusual qualities, hard to find in any person, much less in any politician.  The first was his essential tolerance. In contemporary discourse, we have bastardized the term.  Some use it in a pejorative way, with “tolerance” a synonym for “indulgence”—the habit of ascribing all bad behavior to moral weakness enabled by liberal guilt.  Others describe it as a universal virtue that must be applied to everyone—they command us to understand “root causes” regardless of actual conduct.  Lincoln, I think, embodied a different type of tolerance, one so subtle that it is almost impossible to accurately describe.  His was the tolerance of common courtesy, of accepting differences without embracing them.  He did not demand that you look like him, think like him, worship like him, or vote like him as a predicate to earning his respect for your basic human rights.

If there is a Lincoln Myth, there is also a Lincoln Reality—a man of remarkable tolerance, and an acute and humbling sense of his own limitations. And one, having given every last ounce of devotion to doing an impossible task as best as he could, falls like the cherry blossom, at the peak of (imperfect) perfection.

This was first published on April 14, 2015. Renewing it today because Lincoln remains eternally relevant.