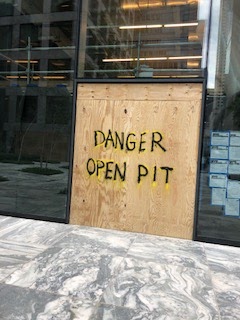 Had enough of the 2020 election? Take heart, there are just 134 days left until Vote-If-You-Can Tuesday. That’s less time than it took Napoleon to march his Grande Armée into Russia, win several lightning victories, stall out, and then retreat through the brutal winter, with astronomical casualties, all the while inspiring the equally long War and Peace and the 1812 Overture.

Who will win? My renowned tea leaf collection seems a little wilted today, but it still says that absolutely nothing is out of the realm of possibility. We really could go anywhere from a 2016 redux to a Democratic sweep. Given the vintage nature of the two candidates, you can’t even rule out a variation on the West Wing Leo McGarry scenario. Expect the asymmetric.

Under any circumstances, the electoral math would have been fascinating. Conventional wisdom has always been focused on the six Obama 2012 states that Trump flipped in 2016 (Wisconsin, Pennsylvania, Michigan, Florida, Ohio, and Iowa). A key portion of the “Biden Electability” argument was based on his presumed appeal in those states. They would be the battleground because that’s where the winner would be determined.

It’s fair to say that fate, in the form of a pandemic and the country’s reaction to the death of George Floyd, has taken a hand. There are now multiple pathways for each man to reach 270, including several really unusual routes. The recent polling for Trump has been brutal. His top-line favorability numbers have taken a hit, particularly in the areas of race relations and handling COVID-19. That’s been further reflected in the horse race, where Biden has a roughly ten-point lead nationally.

Of course, 2016 showed in excruciating detail just how national polls can be woefully inaccurate in predicting where the Electoral College will end up. It’s reasonable to expect that past is prologue for even greater Democratic margins in places like New York and California, given the way Trump revels in messing with the Blue States. Unfortunately for Joe, once again, when you dig down deeper, you can see that many of the critical state polls are less decisive than the national ones. Joe leads, sometimes somewhat improbably (North Carolina, Arizona, and Georgia) but often barely. He’s within the margin of error in Florida, Georgia and Ohio, and could easily whiff on all three. A 2.1% advantage in the popular vote left Hillary’s candidacy in smoldering ruins. I’ve seen some estimates that Biden could have as much as a 4% advantage, and still lose.

Still, in an environment where Trump’s base support is nearly unshakable, Biden’s edge is notable. The prospect of his holding here, or even running the table, is not completely out of the question, just long odds. Biden’s absolute peak might exceed Obama’s 2008 win (365 EV) with a slightly different mix. The more probable outcome is that present polling numbers are truly of the moment, and that moment is the nadir of Trump’s fortunes. If that’s true, not only does Trump have the ability to grab back some of “his” states, but also can target at least two Biden ones. Both Minnesota (with added volatility because of George Floyd) and Nevada (casino-dependent and hurt by the shutdown) are possibilities.

If this all weren’t so incredibly important, it would be abstractly fascinating. For years, political scientists have been talking about how virtually every election has become nationalized, even when voters, in selecting their team, seem to be voting against their own interests. Consensus is out, angry tribalism is in. 2016, with its Trump-Clinton car-wreck of the unthinkable vs. the unlikeable, was the culmination of this movement. Never have a pair of candidates been so detested by so many—yet nominated.

2020 was shaping up to be much the same. Although none of the potential Democatic contenders generated nearly the visceral reaction that Hillary did, Trump was already peppering them with insults, and Trump-aligned social media spreading some poison. Suffice to say three-plus years in the White House had done nothing to mellow him. A great many people thought Trump would be a moderate businessman who would break some eggs, but in the end govern center-right. They were wrong. Vote Trump, you get deep dark dead-red Republican, with a potent dose of malevolence. That’s who he (now) is, and there are tens of millions who find that appealing. There are plenty more who would have liked the policy wins wrapped in a prettier package, but think what’s in the box looks good. When we talk about Trump’s base, we have to acknowledge that it’s not just MAGA-hatted attendees at one of his jumbo rallies or the near-monolithic support he gets from Evangelicals, but also transactional voters like seniors who want order and business people who let the bottom line guide them. A key to understanding Trump’s appeal is that he also gives, he doesn’t just take, and those who get don’t often refuse out of principle.

As long as these folks find their fulfillment (for emotional or practical reasons) in Trump, he has nationalized the election to an extent not seen before. You are either in the Trump Tent (and that includes Republican candidates for other offices) or you are the enemy. It’s all Trump: Trump dominating the screen(s), Trump meting out pain and pleasure, Trump using his incumbency for all it’s worth. That’s what Democrats anticipated as they lurched their way through the primary season. That, along with the confounding fact that, despite their strong performance in the 2018 Midterms, there was plenty of evidence that Trump’s strength in the states he had flipped in 2016 was holding.

Biden’s astonishing resurrection after the South Carolina primary on February 29th altered the emotional dynamic, but did little to change the basic math. It was still Trump’s game (and Trump’s Senate to investigate Biden on Trump’s behalf). While Biden was perceived as more electable by Democratic Primary voters, I think Trump and his brain trust entered mid-March with a feeling of confidence. Joe was feeble and battle-scarred, and they relished the idea of pulverizing another artifact of the Obama Era. They didn’t realize they were sitting on a viral stew (actually, two, the other being George Floyd) that could fundamentally change the landscape in the blink of an eye.
Trump was about to be tested by an issue no amount of Trumpiness would make go away.

Sometimes, there really are those 3:00 a.m. phone calls. I’m going to make two suggestions that seem mutually exclusive but I believe are true. First, Trump fumbled terribly in his initial response to COVID. He blustered, pointed fingers, suggested it was a hoax, picked fights with Governors, and obstructed his own government from helping. Second, it doesn’t matter, at least politically.  At worst it’s a flesh-wound for his campaign. A lot of elected officials, on both sides of the aisle, didn’t quite grasp the threat early on, and, while most of them didn’t use a bazooka on their critics, I think the public has internalized Trump’s excesses and are rarely moved by them. By the time we reach November, most aren’t going to blame him for March, April and May.

What will be important is what happens over the next 133 days, where it happens, and when. Absolutely no one can tell you with any degree of certainty what infection and fatality rates are going to be next month, much less in November. Nor can they predict whether more effective treatments or a vaccine will become available. The best that the best and most experienced minds can do is talk about probabilities.

Trump is going to have to rely on his extraordinary luck. One thing we learned from the initial public reaction to news of the virus and government attempts (or non-attempts) to get in front of it was how site-specific it was. Philip Klinkner, in an article for Vox, pointed out that “Clinton counties make up a slight majority of the US population, but so far they have seen 76 percent of the Covid-19 cases and 80 percent of the deaths.” He goes on to say, “This means Democrats and Republicans have experienced the pandemic in objectively different ways. These differences are already shaping the nation’s pandemic response—and may well influence American politics for years to come.”

Klinkner’s article was published on May 1st, and he was prescient. The divide continued to grow as new data came in, showing that the greatest infection and fatality rates were in Blue States and among the elderly and minorities. Trump’s base remained remote from the crisis, except in reacting to remediation efforts. Their resentment at restrictions and the economic implications, stoked by the President and his allies in the media, intensified. Even recent spikes in infection rates in reopening Sunbelt states haven’t yet caused universal alarm in the places they should, or action. These hands-off choices represent gambles by Governors like Greg Abbott, Ron DeSantis, Brian Kemp, and Doug Ducey (Texas, Florida, Georgia and Arizona) that the number of the seriously ill will stay below the rest of the population’s pain threshold.

Their gamble is Trump’s gamble. If he wins it, not only will he regain his grasp on some of those wavering states, but he will also put some others, presently in Democratic hands, in play for himself and other Republican candidates. The public in general has consistently supported reasonable restrictions to blunt the curve of the disease, but its patience is not infinite. People want to get back to the lives they led in early March. Trump (and Trump-supporting Governors) are telling them they can.

Timing is critical. First, Trump wants things to loosen up enough to force Biden to abandon his McKinley-esqe “Front-Porch Candidacy,” which allows Joe to husband his physical resources for the home stretch. Biden’s measured, Presidential responses, on COVID, on George Floyd, and on anything else, either in public, or from his home, are driving Trump nuts. He wants Biden to step into the (non-virtual) ring, and has been ridiculing him for his weakness. So far, Biden hasn’t taken the bait, but he will have to if conditions improve. Both his team and Trump realize his vulnerability.

Second, Trump wants to recreate 2016. He craves the adrenaline of rallies filled with mask-less people waving banners and cheering themselves silly. Trump is a master of branding and symbols, and for him, the most important quality to showcase is strength. His gathering in Tulsa just this past Saturday was a critical test. Watch the next two weeks. If he and his followers can get through it with no significant spikes in infection rates, that opens the door for more rallies, and more grievances against “weak” Governors and Mayors who insist on putting public health concerns first. If infections surge, it will be more bad PR, but Trump will try again in July somewhere else. He’s not giving up his rallies, especially as it would be seen as a concession. Trump doesn’t do concessions.

How does this end? Which side will have a hangover on the Wednesday after? It’s unclear.  Biden is doing a little rope-a-dope, and it’s working for him, at least now. As to Trump, he’s a bit off his game, but still punching, still the apex predator. The basic Trumpian approach to everything, taking credit while refusing to accept responsibility, spiced up with what you saw in Tulsa, remains adaptable to the current situation. More importantly, Trump can also still reach transactional voters: he has a plausible argument that (unduly harsh) restrictions tanked the economy, and it’s his pro-growth policies that will lead us back. He might even get some help from the weather, as the summer heat is predicted to slow the virus.

134 days is a lot of time to get things right. Or it’s too many.  Of course, Napoleon eventually
abandoned the Grande Armée and returned home on a sleigh. It was awfully cold out there.