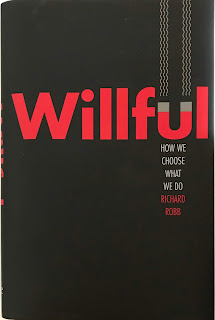 Economics. The dismal science. All those numbers and graphs, formulas and derivations, tombstone-sized copies of Paul Samuelson and William Nordhaus’s Macroeconomics (now apparently in its 19th edition), and memories of the detritus that came with them: half-filled coffee cups and overfilled ashtrays, mechanical pencils and HP-45s.

As you might imagine, with that as background, I approached Willful: How We Choose What We Do with a bit of primal trepidation, something deep inside my limbic system. To add to my anxiety, I had just seen a review of the latest Piketty missive under the ominous headline “Thomas Piketty’s new War and Peace-sized book…” and wondered what kind of dense read I was getting myself into.

I was wrong. Once Mr. Robb’s book was in my hands, I realized that I was looking at an entirely different animal, one that didn’t scream at or lecture you, but, in calm, measured tones laid out a fairly remarkable thesis—that existing, accepted theories of why we do things (such as the redoubtable “Rational Choice”) don’t tell the whole story.  We aren’t all calculating machines all the time, either consciously or subconsciously doing the math to maximize the return from each transaction. Rather, as humans, we can be motivated by individual, personal factors that have meaning and value to us beyond just what a rational choice analysis might direct. These factors go into the process of what Mr. Robb calls “For-Itself Choice.”

For-Itself Choice is not a substitute for existing theories of why we do things. Nor is it a rejection of classic Rational Choice. Rather, it’s a type of bolt-on, the impact of which, in any transaction, can run the gamut from being essentially non-existent to decisive. There is a humanity to this that goes beyond the coldly logical. Sometimes that humanity results in a decision that might appear obtuse or even foolish, but satisfies the actor because of the different value he or she places on one or more idiosyncratic factors.

Willful lets you peek behind the curtain of Mr. Robb’s personal evolution in thought, as he moved from the intellectual salt mines of the University of Chicago’s Economics PhD program (with its 80% failure rate), to trading for a large Japanese bank, to his current positions of Professor of Professional Practice in International and Public Affairs at Columbia and CEO of the investment firm Christofferson, Robb & Company. He shares just enough of his background (including some seriously traumatic business experiences) to give you context for his present outlook.

What I appreciated about this book is how carefully thought out and designed his presentation is and how introspective, without being self-absorbed, I found his writing. There are two insights at the very beginning that seemed to reflect what shaped him: First, he “began the 1980s drunk on neo-classical economics,” as he was initiated into a group that thought that “the world was revealing its unseen order.” Second, why did he and his hardy band of survivors choose this path over more lucrative (and certainly more pleasant) environments? Because they “liked that it was hard.” The game matters. The challenge matters. Purpose matters. You can see why he has such personal and professional admiration for his colleague Edmund Phelps, who writes so eloquently about the importance of work with meaning.

The two tent posts that Mr. Robb began with are the big one, the “Chicago School”  Rational Choice, which he characterizes as “the theory that assumes people choose rationally and that supply and demand are in equilibrium, and then tries to explain as much of the world as it possibly can,” and the thinner reed of “behavioral economics” in which actions and choices are seen as influenced by cognitive biases that lead to results that don’t necessarily optimize returns.

In the end, Mr. Robb left Chicago with both his PhD and a core uneasiness about the dissonances he saw between the answers that classical theory offered, even when combined a bit with behavioral economics, and what he was experiencing in the day-to-day world. Something was missing, and, while he doesn’t articulate it in this way, you can sense a concern with the soullessness of always reducing everything to a trade where numerical values are closely calculated on both sides.

To illustrate how Rational Choice may not always be applicable in the moment, he uses an example that he returns to several times in different variations: the woman who decides to try to rescue her drowning husband. Obviously, there’s a rational choice math that could be applied—the earning power of the husband, the risk to her own life or health (and her earning power), the probability that her husband might save himself, and so on—but no one actually whips out a calculator and does that.  You either jump in or not, presumably motivated by factors that go beyond the terms of his life insurance policy and whether you need to pay for his dry-cleaning if he doesn’t survive.

In this, and employing Phillipa Foot’s Trolley Problem, Mr. Robb is trying to get at what we laymen might call the human factor, qualities like emotion, altruism, pride, loyalty, and ethical values. We all possess these to some degree and apply them idiosyncratically in ways that rational choice can’t always predict.

I thought his chapter on altruism was particularly interesting. He identifies five different types, three of which (“selfish altruism,” “manners and ethics,” and “care altruism”) are essentially purposeful,  and less truly altruistic. In a second category, “mercy altruism” (Abraham bargaining with G-d over sparing Sodom and Gomorrah, or the Good Samaritan), and “love altruism” (the woman who jumps in the river) are more “For-Itself,” and, by nature, less transactional.

There are a lot of ideas in Willful, and you may find yourself questioning both your assumptions and the author’s. But he’s an effective advocate; he writes confidently and authoritatively, without condescension or resorting to outlier examples to make his point. He draws you into unpeeling the onion of your own decision-making.

The game really does matter and understanding how it is played matters as well. Mr. Robb’s language is understated. His reach is not—while not rejecting Rational Choice, he certainly is advocating grafting on an additional leg. I found myself with more questions, and he was kind enough to answer a few by email.

I asked him about Zugzwang, referring to the moment in a chess game when you must move, but any change in your position weakens it.

I don’t think Zugzwang applies to economics. Rational choice is ordinal, not cardinal: If I prefer A > B and I’ve got to move, pick the one I prefer among all the others. The fact that I have to move, is just the state of the world. The least bad and the best, to an observer, mean the same thing.

Did he think there was the conceptual equivalent of the roadside sign, “Welcome to New York, the For-Itself Choice State”:

I don’t want to commit to drawing a hard line between the two realms. On the margins, someone could have good arguments for all sides. What is not defensible, in my view, is to argue that it’s all one realm or the other. The way I experience it, for-itself is woven into our lives at large and small scales—it’s not a departure from the ordinary world of rational choice.

That last point perhaps sums it up. There is an order to the world, albeit not a linear one, with every strand having its own importance. If you read Willful, you might just catch a bit of Richard Robb’s passion for finding that order.
Willful is published by Yale Press and will be released November 12.


***
Postscript:  I had intended to end here, but for a short conversation I had last week, after the Marathon. I asked someone I knew (a consultant) whether she had ever run New York: “Yes, and after the tenth mile there’s no marginal utility in it.”

I put this in an email to Mr. Robb, and in less than a minute, received the following reply:

Review of Richard Robb's Willful first appeared on 3quarksdaily.com on November 11, 2019, and you can find the link below.