A Sentimental Bond With The Product: Joe Biden, The Past And The Future. On 3Q 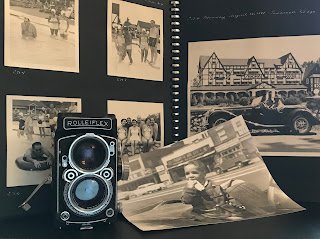 There is a wonderful scene to close the first season as Don Draper pitches an ad campaign to two exceptionally nerdy guys from Kodak. The boys from the lab want to talk technology, but a plastic and metal “wheel” is decidedly unsexy. Stumped at first, Don puts in a few of his own 35mm slides and an idea emerges. The lights dim, and images of happy moments with wife and kids, some posed, more not, each appear on the screen, with Don providing narration:

"Well, technology is a glittering lure. But, there is the rare occasion when the public can be engaged on a level beyond flash, if they have a sentimental bond with the product. My first job, I was in-house at a fur company, with this old-pro copywriter, a Greek named Teddy. Teddy told me the most important idea in advertising is new. Creates an itch. You simply put your product in there as a kind of calamine lotion. But he also talked about a deeper bond with the product. Nostalgia. It’s delicate, but potent. … Teddy told me that in Greek, ‘nostalgia’ literally means ‘the pain from an old wound.’ It’s a twinge in your heart far more powerful than memory alone. This device isn’t a spaceship, it’s a time machine. It goes backwards, forwards, takes us to a place where we ache to go again. It’s not called the wheel. It’s called the carousel. It lets us travel the way a child travels. Round and around, and back home again, to a place where we know we are loved."


I’ve never had an itch to see Joe Biden as President. I do like him. A lot of Americans of a certain age like him, friendly and familiar and a bit worn, like a favorite old jacket you take out every fall when it gets a little chilly. The country could do a lot worse than elect Joe Biden. He has the temperament and the policy chops: former Chairman of both the Senate Foreign Relations and Judiciary Committees, former Vice-President, former glad-hander, back-slapper, and deal maker. Republicans who mocked him during the Obama Administration were often secretly relieved when the occasionally aloof President would send Joe to work the back-rooms and rope-lines. Joe got it done.

Of course, that’s all in the past, and on the campaign trail and in debates, Good Old Joe looks more and more like Really Old Joe.  He’s always been a bit of a malaprop, a story-teller, but there’s a legitimate concern that the 2020 model Biden might very well be past its sell-by date. How big a problem is this? It’s a math question: Trump’s base is his for life, and he has an astonishingly high approval rating among Republicans.

Is Joe agile enough to satisfy those needs, and, if he can, is he up to the job itself? The second question is actually more easily answered than the first. Being President might be more doable for him than gaining the Presidency, because you can staff the Cabinet and the White House with top-tier talent and rely on them and muscle memory. Biden only needs to set the tone and direction, and can husband his resources for the big things.

Of course, before we can consider whether Biden offers enough to be President, we have to ask if he’s even going to continue his campaign. It’s a long way to the Convention, and only he, his family, and his closest advisors really know if he’s up to the rigors of a full primary campaign, much less the brawl that the general election will be.

Rigors they are. While I doubt anyone in his camp thought it was going to be easy, they may not have anticipated how ferociously the spotlight has been turned on him, and how unkind it can be. Axios reported last week that, of the 22 most viewed articles about Biden, 21 were negative.
Hasn’t Joe has always been a gifted gaffer? Yes, but not when everything is judged through the lens of either age-related weakness, or old sins (real and imagined) not fully atoned for. Our culture, from both Right and Left, has fully embraced the public grievance model, and anyone who has spent any time in office has done any number of things that can be turned into an “I have never forgiven him for…” opinion column or interview.

Offsetting this are two significant Biden strengths. First, he’s still Joe Biden, the guy with the sentimental bond, and that fosters a different set of expectations for both him and his primary opponents. It’s not a prerequisite for him to articulate and defend every iota of his platform, or out-plan Warren, out-shout Bernie, out-prosecute Harris, or out-fresh-face Pete, etc.  Unlike other candidates who, to break out, may have to calibrate new positions or a new tone, Joe can stick to being who he is. And regardless of whether he ultimately gains the nomination, voters don’t want to see him embarrassed. As Julián Castro learned painfully last Thursday, his primary opponents (and their campaigns and surrogates) are going to need to be very careful in how they take him down. If his support drops organically as a function of younger and fresher alternatives, that’s fine, but taking pot-shots at him will come at a price. Mean is not going to play well.

The second Biden asset is that Joe owns one of the two working Kodak Carousels in existence (Trump, with his own set of slides, has the other). There is a particularized past that clings to him, a better time, warmer, far less confrontational. To borrow David Brooks’ description of Abraham Lincoln, Biden is a “very poor hater,” and the essence of his message is that he wants to take you to that place, a place where you know you are loved.

A Trump-Biden election is not merely a battle of policies, but also a battle of memories. Biden people think more like Greatest Generation folks—we do best when we work together on big things, honoring everyone’s efforts. Trump’s place? A different narrative about the past: Trump supporters recall a more orderly, more homogeneous, more muscular time—figuratively, as in the vigorous expression of power, both here and abroad, and literally, in the sense of swashbuckling capitalists and brawny men carving lives out of the wilderness (and steel mills, and coal mines, and virgin stands of trees, etc.).

If you’ve gone this far, you’ve noticed something is missing: It is all about the past, all about the old pictures in the Carousel that we’ve seen dozens of times before. Yes, that is a funny hat Grampa Steve was wearing, and we did know that Aunt Kate loved books, horses, and volleyball, but what relevance does Joe Biden’s Time Machine have for anyone under 50?

Trump people explain Trumpism as a necessary reaction to Clintonian soulless triangulation and Obama’s “weakness.” Hence, the strong hand, with friend and foe, even when Trump seems to stretch his authority beyond the breaking point. The one startling thing about Trump’s first term has been the utter lack of pushback from Republicans in Congress, even when their own authority has been threatened. They have abandoned checks and balances, and, in effect, affirmed both Trump’s tone and his choice to satisfy only his base. Reelecting Trump will simply institutionalize this divisiveness, and the present will become the future.

The Biden alternative implicitly rebukes this: Biden people see Joe as the “repairer of the breach” between a gauzy, more collaborative past and Trump’s outlaw-biker vandalism. We will heal ourselves first—perhaps even at Joe’s Inaugural. Then we will go from Grand Bargain to Grand Bargain, everyone respecting boundaries and norms, with the maximum number of people benefitting, and everything will get better.

What’s “better”? That depends on whom you ask. It’s worth remembering that a lot of older voters just want a little peace and quiet—don’t touch their benefits, lower the volume, and keep things the way they used to be. In recent years, Republicans have been successful with this group because of demographic and cultural changes that threaten Seniors’ sense of security. But Trump is so disruptive that “better” for them might be Biden’s more soothing vibe, and that could swing them back in just enough numbers to regain the White House.

Maybe, but it’s also possible that the whole Biden pitch, given where we’ve come as a country, is basically a lot of well-meaning malarkey. And, maybe “just enough” is really not enough, not when you have folks like Mitch McConnell out there. Even to start to recover from Trump and Trumpism, Democrats need the White House and Congress. They need to win at the state level, since the 2020 Census is going to bring about redistricting. The real problem with Joe Biden’s past isn’t that it couldn’t win, it’s that it may not create enough energy among those who helped the Party make gains in 2018, specifically, forward-looking suburban women and Millennials. What moves them are opportunity and quality-of-life issues: jobs, education, student loans, climate change, guns.

Now is the time to bring them (the issues and the people) front and center. A collaborative tone, the “Joe” way, is terrific, but failing to show urgency and spine is political malpractice of the highest order. If the Democrats lose this election it’s going to be because they reacted to every Trumpian “squirrel,” while being passive about things that people really care about. The fierce urgency of now must motivate them. That means fresh ideas and fresh faces with seats at the table who are also out there making the case as surrogates—or running mates.

Joe Biden is a fine man who has served his country honorably and well, and I don’t believe that his core values would (or should) ever go out of style. He has the right to decide for himself how best to see his legacy carried out, either through continuing his own candidacy, or by stepping aside and letting others step forward.

Nostalgia. It’s the ache from an old wound, delicate, but potent. But is it potent enough?

"A Sentimental Bond..." was first published on 3Quarksdaily.com on September 16, 2019.
https://www.3quarksdaily.com/3quarksdaily/2019/09/a-sentimental-bond-with-the-product-joe-biden-the-past-and-the-future.html