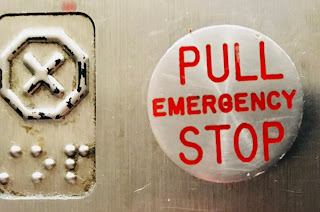 The man for whom the word “Emergency” must have been invented (“serious, unexpected, and dangerous situation requiring immediate action”) pulled the pin out of yet another hand grenade.

Our President, Donald J. Trump, bollixed, frustrated, stymied, and parboiled (twice) by the evil Nancy Pelosi, went off and did just what he wanted to do anyway. He picked up the compromises made by Democrats in bipartisan negotiations to re-open the government, put them in his pocket, and grabbed for more.

What a fine drama it was. He summoned Senate Majority Leader Mitch McConnell to the White House, heard him say the votes were there to pass the bill, and told McConnell that he, Trump, did not care what Congress thought. It was irrelevant. The President had consulted his legal advisors, his portrait of Andrew Jackson, and his statue of Winston Churchill, and concluded that the term “emergency” also encompassed any situation in which he did not get his way.

“Mitchie,” he thundered (the exact transcript has been suppressed and placed in a secure location with the Putin conversations), “I want my Wall, and I will smite this bill unless you pledge your undying support for my Emergency Declaration.” The Senior Senator from Kentucky, wily cephalopod that he is, complied. None of us need speculate over exactly what curses, orbs, and scepters were employed, or whether McConnell extracted something for himself, but he knelt, thanked his master, and then left the Oval Office back-side first, bowing at every other step.

Game on! So we move to the most frequently used phrase in the Trump Era, “Can he do this?”

Even to approach this question rationally, you have to wait until the adrenaline wears off, and show the extraordinary discipline of forgetting that it’s Trump. It is a challenge. The infection rate of Trump Derangement Syndrome (both the adoring and abhorring variants) in the population is extraordinarily high. Scientists are feverishly working on a cure, but right now, the only treatments are palliative, such as throwing your iPhone at your MacBook, and watching both bounce off a screen with either Rachel Maddow or Sean Hannity whack-whacking back at you.  This is probably best done in a hotel bar, where, along with ample lubrication, most establishments have installed high-impact glass in response to previous incidents.

Take a breath. Other than his being the ultimate catalyst, this isn’t about Trump, and it’s certainly not much about the Wall. It’s about the role of the Presidency, and the exercise of political power, and the balance among the three branches of government. To be more explicit, it is about virtually anything a President says he wants that a Congress won’t give. Can he just take it?

Let’s save some time (and laughter) on the “Congressional backbone” part (of the more than 60 Republicans who voted to reopen the government on February 14th, just 13 reaffirmed their support less than two weeks later) and head right to litigation. That’s what 16 Blue States did, and their Complaint is as good a place as any to begin to explore the legal issues.

There is an interesting tension in the law when it comes to political issues. Being “legal” is not the same thing as being wise. Politicians, answerable to the electorate, should be the ones making policy. The Supreme Court’s role is not to decide the wisdom of a policy, but only whether it was properly enacted, and whether a particular application of it conforms to Constitutional requirements.  It’s not the Court’s job to fix basic foolishness.

The first thing you become aware of when asking, did the President have the right to declare an emergency, is that Congress might very well have been foolish. It has, over many years, ceded to the Chief Executive a heck of a lot more than was granted in Article II of the Constitution. The Brennan Center counts a web of up to 123 separate statutes that give to a President some additional emergency authority, the big one The National Emergencies Act of 1976 (“NEA”). For those of us who mocked Texas’s mass flip-out over Jade Helm, the laugh is on us. Try reading this excruciating article by Elizabeth Goitein in The Atlantic and see if you can suppress your urge to visit your safe-deposit boxes and pack your go-bags before you get past the sixth paragraph.  It’s not good.

There is an irony about the NEA: the impetus for it was Congress’s desire to rein in Presidents from going off on their own without Congressional oversight. But, by codifying powers that the President previously didn’t have, an unintended consequence was that Congress may have written a near-blank check. True, Presidential authority is not unlimited: Presidents cannot just conjure up new powers, and Congress can enact a Joint Resolution terminating the Emergency, but there are a notable lack of guardrails after that.

Why?  Best guess is that they thought they were empowering rational Presidents who would act in genuine emergencies (Biblical Ten Plagues sorts of things: floods, pestilence, hail, etc.). They never seriously considered that a future President might use an “Emergency” for a purely political reason. As Monty Python reminds us, no one expects the Spanish Inquisition.  So, off to court it is.
What might your ordinary, run of the mill, appointed-for-life, Harvard or Yale-trained Justice think?  Here are some of the arguments traced out by the 16 States in their Complaint.

1. It’s not an Emergency.  I wouldn’t be surprised at all if a lower court would rule that Trump’s own statements and prior conduct indicate that the Wall was not an Emergency. This has a lot of appeal, given his verbosity, and that 58 former National Security folks just signed a letter saying it wasn’t. That being said, I suspect the majority (quite possibly at least six) of the Roberts Court is going to have at least a very strong preference for not setting a precedent of potentially second-guessing a President’s judgment on what constitutes an emergency, particularly one that potentially involves security.

2. Congress already considered Trump’s request for this particular project and rejected it. Given the specificity and the closeness in time of the Congressional vote and Trump’s subsequent Declaration, this approach might carry some weight. The President proposes, Congress says no, the President takes what he wants anyway, Congress passes a Joint Resolution reaffirming its previous position…and the President refuses to sign it, thus diluting Congressional power by requiring a two-thirds override vote.  Intuitively, that can’t be right, but the textualists and the hardliners are likely to argue that Congress could have, and perhaps should have, addressed that specifically in the NEA.

3. It violates the “Appropriations Clause.”  Article I of the Constitution is very clear that it’s Congress that gets to write checks: “No Money shall be drawn from the treasury, but in Consequence of Appropriations made by Law.” There is a solid argument Congress can’t properly assign that power, even in limited circumstances, without amending the Constitution itself.  I think this one has a chance, particularly because of the granularity of budget allocations and their impact on individual states. It would be interesting to see how Originalists/Strict Constructionists address that issue, and reconcile it with their support for expansive Executive Powers.

So, what wins here? Difficult to tell, but with Chief Justice Roberts likely as the swing vote, I can see a very narrowly written victory for Trump, authored by Roberts, with a complex multi-concurrence and dissent mashup.  What Roberts might say, is that (a) Congress does have the authority to give flexibility to the Executive in spending and has, in fact, been doing so for a very long time, (b) Congress has a remedy for this specific Trump action of which it failed to avail itself, and (c) (this is a Roberts favorite) poorly-written legislation needs to be re-written by Congress, and not edited by SCOTUS to reflect a legislative intent that was not clearly expressed.

I suspect that Roberts will probably go on with substantial dicta on how the Court’s decision is on this specific claim only, that it should not be seen as a precedent, and that it’s not an open invitation for Presidents to exceed their authority, and he might even include some scolding of Congress to get right on this and either amend the NEA, and/or pass a Joint Resolution to roll back Trump’s Declaration. No one will pay any attention to any of that.

Why would Roberts do this when he has to know that the result is potential chaos? Because of the internal dynamics of the Court. Let’s put aside the widely held conviction that there are Justices who are essentially political animals. The more important point is that there are Justices (particularly the two newest) who support the idea of broad Presidential powers, and Roberts needs to give them something, but is not ready to go with them in the (further) direction of an Imperial Presidency. I also suspect that Roberts is canny enough to realize that there will be a time in the future when he and his fellow conservatives and ultra-conservatives want to hem in a Democratic President. A hearty clap on the back for Trump followed by a wagging finger at someone more Blue would be bad optics. And, finally, Roberts does not wish to risk a Constitutional confrontation with Trump, who would almost certainly relish the opportunity to put even the Supreme Court in its place. So, Roberts will leverage his own, necessary, support to achieve the narrowest result.

What will ensue? We can expect a blizzard of angry commentary, and a gleeful White House spitting out one Emergency after another. And one absolutely miserable man, good old Mitch McConnell. He’s got the tiger by the tail and can’t let go. He really doesn’t want a President—any President—having the kind of power that Trump has just assumed.  McConnell knows, institutionally, it is a catastrophe, a serious erosion of Congressional prerogatives. It’s also going to play havoc with future negotiations with the Democrats. McConnell will have to get Trump’s signature in blood in advance before Pelosi agrees to anything. And there’s another election coming in 2020; McConnell needs to defend his Senate majority; and swing voters will not be enthusiastic about this.
What’s an utterly soulless political operative to do? Start herding cats, and for the long-term good of the country and his party, agree to amend the NEA in a thoughtful way, so Presidents, present and future, can’t do what Trump did (or could do).

That is not going to be easy. Trump will veto anything that in any way limits his power, and that means McConnell (and Kevin McCarthy, House Minority Leader) will have to come up with enough votes from their side of the aisle to join with Democrats and override.  The math is daunting in an era in which Trump’s approval rating among Republicans is sky-high and 80% of them approve of his Emergency Declaration. Who in the shockingly supine GOP Congressional Caucus wants to put a bulls-eye on their back?

Not unlike the laws of politics.  Stay tuned.

Emergency! first appeared on 3Quarksdaily.com on March 4, 2019 at: