The Mortar and The Pestle on 3Q 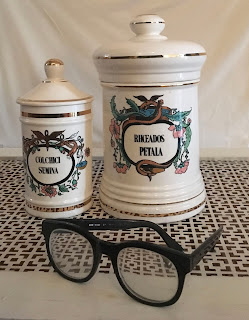 My dad was a pharmacist. He had an old-fashioned store (including an actual soda fountain and stools) and some of the old-fashioned tools of the trade: scales and eye-droppers, spatulas and ointment bases, graded flasks and beakers, amphorae, and his mortar and pestle.

Pharmacy was a bit more of an art in those days and doctors often wrote prescriptions that had a little eye of newt in them. This could make Dad cranky, as they took time and counterspace, but I suspect that, secretly, he liked doing them. He would bring out the mortar and pestle (sometimes with a Remington’s Practice of Pharmacy), and, for all intents and purposes, he could have been an herbalist for a Pharaoh, so old was the tradition of combining exotic ingredients and using time and pressure until the desired potency and texture was achieved.


Or, to borrow from a different liturgy, the Gates of Repentance are always open.
Michael Liss (Moderate Moderator)
The Mortar and The Pestle was first published on October 15, 2018 in 3quarksdaily.com